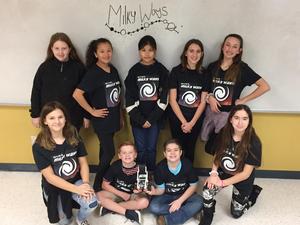 The Mountain Valley Milky Ways are hard at work preparing for the First Lego League Championship tournament coming up in March.

The Milky Ways advanced to the championship on Jan. 26 during the Alamo Area Curiosity Division Qualifier Tournament at JSTEM Academy where it competed against other First Lego League teams from CISD and other school districts.

In fact, two teams from MVMS competed in the qualifier tournament along with teams from Danville MS, Church Hill MS and Spring Branch MS.

Like the elementary teams, which competed recently at Canyon Lake High School, the middle schools worked with this year’s theme, Into Orbit, which challenged teams to choose and solve a real-world problem of space exploration.

“During the competition year, the students learn creative problem-solving, programming skills and mechanical design,” says David Gould, CTE teacher at MVMS and the Milky Ways coach. “This year’s theme was space travel. The students delegate responsibilities and present their ideas to multiple audiences using a variety of media. Most importantly, the students accomplish all of this while having fun and making friends.”

These middle schools teams are competing in the First Lego League program for fourth through eighth grades as part of FIRST LEGO League which was founded in 1998 by FIRST (For Inspiration & Recognition of Science & Technology) and the LEGO Group. The two joined forces in order to engage young students in science and technology. Today, more than 320,000 students participate in 98 countries in four programs divided into age groups: First Lego League Junior for kinder through fourth grades, First Lego League for fourth through eighth grades, First Tech Challenge for seventh through 12th grades and First Robotics Competition for ninth through 12th grades.

Every year, the challenge includes three parts: the Robot game, the Project and the Core Values. Teams of up to 10 students along with at least two adult coaches participate in the competition by programming an autonomous robot to score points on a themed playing field for the Robot game, develop a solution to a problem which they have identified for the Project while using the First Core Values of discovery, innovation, impact, inclusion, teamwork and fun.