Comal ISD Earns "A" on State Accountability with 97 Distinctions 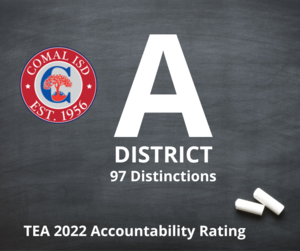 With a grade of "A" and a score of 93, Comal ISD is among the top school districts in the state of Texas based on performance in student achievement, school progress and closing the gaps. This the district's second "A" rating in a row.

Aug. 15, 2022 - The Texas Education Agency (TEA) released its 2022 Accountability Ratings today, and the Comal Independent School District earned a grade of “A” with a score of 93 in the state’s A-F accountability system. All 33 of Comal ISD’s campuses received passing grades with 23 earning an “A.”

“We are excited to receive this rating by the TEA,” says Mandy Epley, Comal ISD’s acting superintendent. “This score is to be celebrated collectively by our teachers, administrators, support staff, students and parents. Together, we will continue to work towards helping each student grow academically year after year as we focus on providing opportunities for each student to be successful.”

This is the first accountability rating to be issued by TEA since 2019 due to two years of COVID-related pauses.

In addition to the “A” rating, 26 Comal ISD campuses received at least one Distinction Designation, earning the fast-growth district 97 distinctions overall. This is an increase from 2019 when the district earned 60 distinctions across 22 campuses.

For Comal ISD Board of Trustees President Jason York, the state’s accountability score shows that the district is committed to meeting the needs of every student across its 589 square miles.

“The past three years, since the last rating was given by the TEA in which we also earned an “A,” have not been easy,” York says, “but we have continued to have high expectations and remained focused on what’s important, and that is providing the kids in our schools with the best education we can give them. We are indeed giving them a strong foundation.”

The A-F system uses a variety of indicators such as graduation rates, college, career and military readiness, SAT/ACT scores and college prep course completion. The majority of a district’s rating is based on indicators other than the State of Texas Assessment of Academic Readiness (STAAR) test.

For a closer look at the new ratings, TEA encourages parents, educators and community members to visit TXschools.gov to view district and school report cards.